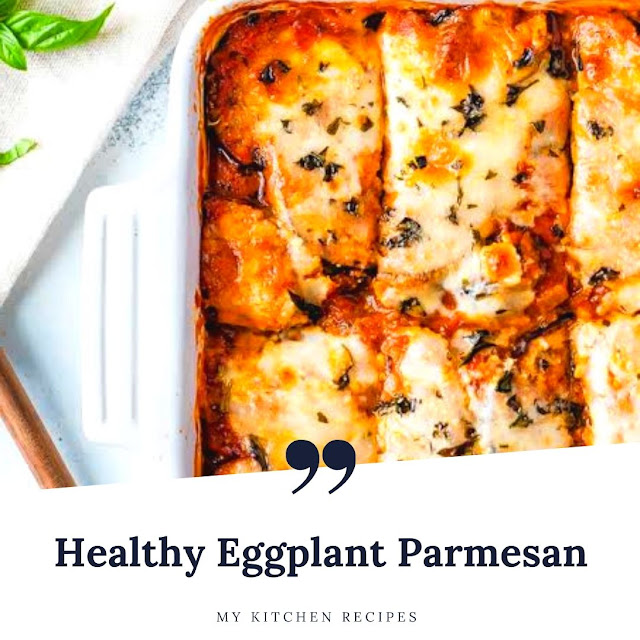 It does take some time to make, but it’s so worth it! The eggplant is layered with sauce and cheese, and almost becomes like a noodle-less eggplant lasagna, it’s so good! It melts right in your mouth with each bite.

I decided take things a step further and make this dish grain-free and gluten-free as well by using almond flour instead of bread crumbs. If you have a nut allergy or don’t have almond flour on hand, don’t fret! I tested this recipe with almond flour and bread crumbs and both versions turned out perfectly so you can use whichever you prefer!
It’s almond flour parmesan coating makes it crispy and so tasty. It would honestly be an awesome appetizer on it’s own, served with a side of tomato sauce for dipping.
It’s delicious and perfect to make ahead and freeze or send to a friend in need!
Like I mentioned before, the process of making eggplant parm is way easier than I thought! And to keep things really easy, healthier and less messy, we’re baking the eggplant instead of frying it.
First things first, preheat your oven. Line two large baking sheets with parchment paper and coat with cooking spray. Next, prep an assembly line for the baked eggplant. In a shallow bowl, whisk together the almond flour, parmesan, Italian seasoning and sea salt. In another shallow bowl whisk the eggs with water, salt and pepper.
Dip the eggplant slices into the egg wash and let the excess liquid drip away. Then sprinkle a little of the almond flour parmesan mixture on each side. I highly recommend sprinkling it rather than dredging the wet eggplant slices into the almond flour mixture. This keeps the dry mixture from getting too wet, which results in a clumpy mixture that won’t stick to the eggplant!
Place the coated eggplant slices onto the baking sheet and spray tops lightly with cooking spray (which helps with browning!). Bake until the eggplant slices are soft on the inside and golden and crispy on the outside, about 30 minutes, flipping around the 15 minute mark.
When the eggplant slices are done baking, it’s time to layer! Spread 1 cup of marinara sauce to the bottom of a large baking dish. Add an even layer of baked eggplant slices. Add another 1 cup of sauce. Top with mozzarella cheese, parmesan cheese and fresh basil. Top with another layer of baked eggplant slices and another cup of sauce. The final layer will be the mozzarella and parmesan cheese and the rest of the fresh basil. Phew! So many delicious layers. Bake the eggplant parmesan dish uncovered until the top is bubbly and golden.

Before making eggplant parmesan myself at home I thought it was much harder and required more ingredients than it actually does. Turns out, the process is pretty simple and you need less than 10 ingredients to whip it up. Here’s what you need for this healthier baked version:

How to Make Baked Eggplant Parmesan

1.    Preheat oven to 425°F. Line two large baking sheets with parchment paper and coat with cooking spray. In a shallow bowl, whisk together almond flour, 1/2 cup Parmesan, Italian seasoning and ½ teaspoon sea salt. Season with salt and pepper.
2.    In another shallow bowl, whisk eggs with 2 Tablespoons water and season with salt and pepper.
3.    Dip an eggplant slice into the egg wash, then sprinkle the almond flour parmesan mixture over each side of the eggplant slice. Place on baking sheet. Repeat to coat all eggplant slices. Spray tops lightly with cooking spray.
4.    Bake until soft inside, and golden and crisp on the outside, about 30 minutes, flipping around the 15 minute mark.
5.    In a large baking dish, add 1 cup of marinara and spread evenly. Add an even layer of baked eggplant slices. Add another 1 cup of sauce. Sprinkle with 1 cup mozzarella, ¼ cup of the remaining Parmesan and 1/4 cup fresh basil. Top with another layer of baked eggplant slices and spread on 1 cup of sauce. Top with 1 cup of mozzarella cheese, ¼ cup parmesan and remaining fresh basil.
6.    Bake, uncovered, until top is bubbly and golden, about 15 to 20 minutes.
NOTES
·         If you have a nut allergy, feel free to use 1 cup  of bread crumbs instead of the almond flour.

Want to Make This Dairy-Free?

If you don’t eat dairy I recommend finding a dairy-free shredded mozzarella. There are quite a few brands on the market now, including Daiya Foods. And for the parmesan, you can try my vegan parmesan made with hemp seeds.